A Flask for the Journey: a Becket Ampulla 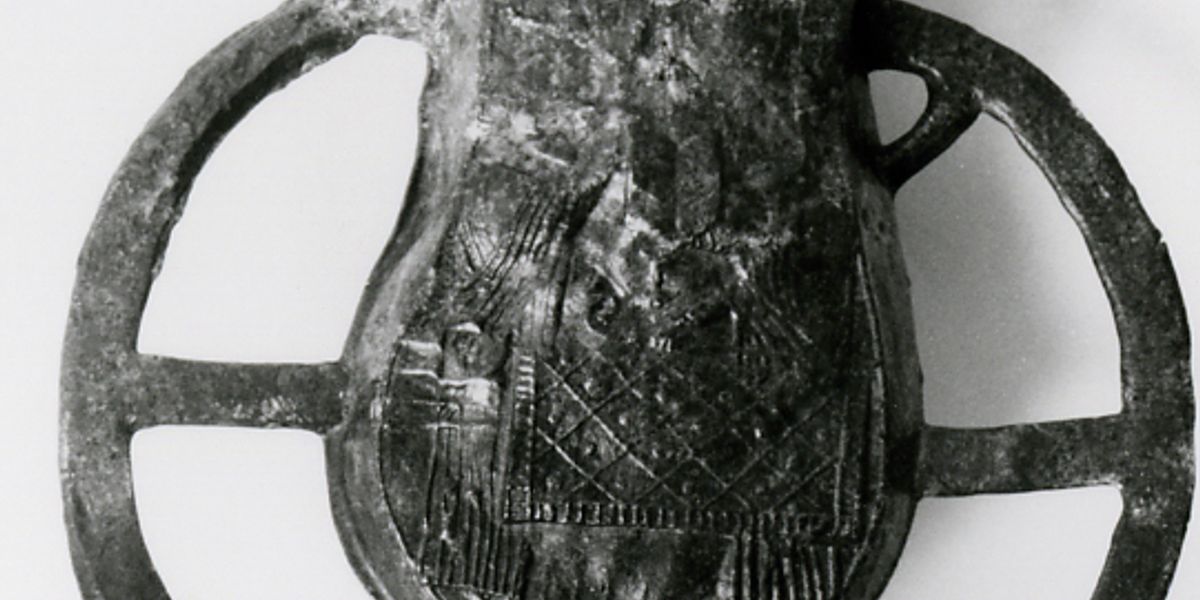 In her January 2020 article for this series, Lucy Splarn discussed medieval pilgrims’ memorabilia from the shrine of St Thomas Becket at Canterbury, looking in detail at one example, a badge showing St Thomas’s head. This month’s article focuses on another type of memorabilia purchased by pilgrims visiting Becket’s shrine – the ampulla. Ampullae from Canterbury were closely associated with St Thomas’s reputation as a healer.

In classical Latin the noun ampulla (pl. ampullae) meant a two-handled flask or container for liquids.  From around the sixth century the term came to refer specifically to miniature metal containers produced to hold relics such as holy water from the River Jordan.  These containers were brought back by travellers who had gone on pilgrimage; they were a convenient and visible proof of the journey.

From the twelfth to the fourteenth centuries, ampullae became the predominant form of pilgrims’ memorabilia at Canterbury. They were usually made of tin, so were cheap to manufacture and most pilgrims could afford them. The small flasks could be hung on a cord around the neck or sewn on to a garment. Other shrine locations also produced them; each favoured its own designs and these were instantly recognisable. Piers Plowman, a late 14th-century poem, describes a pilgrim who had a ‘hundred ampulles’ on his hat, including examples collected from shrines overseas: the convent of St Katharine on Sinai, the shrine of St James of Compostela in Galicia and shrines in Rome.

What did the mass-produced English flasks contain? Ampullae from Canterbury, the major source of the English examples that have survived, held ‘Canterbury water’.  In 1170, the monks of Christ Church collected some of Thomas Becket’s blood from the scene of his murder in Canterbury Cathedral and this was quickly believed to deliver miraculous cures. Sealed ampullae filled with ‘Canterbury water’ (water with drops of the blood) were soon on sale in Canterbury.  The water might be rubbed on to a body part which needed healing or consumed on the spot, or the ampulla and its contents might be taken home for future use. The flask could be given to family members or to a local church. The seal on the container meant the flask might have to be sliced open to allow access to the water, but sometimes the ampulla and its contents were kept intact as a talisman.

Shown here is a Becket ampulla in the collection of Canterbury Museums and Galleries. It is in the form of a bag-like container partially encircled by an openwork frame, 71mm long, 64mm wide and 21mm thick (tapering to 1mm). The ampulla is made of tin alloy cast in a mould. A stone mould of similar design was excavated in Canterbury; the design was popular in the later thirteenth/early fourteenth centuries.

On the obverse is a half-figure of Becket surrounded by round and triangular bosses, symbols of his martyrdom, his head covered by a canopy. The inscription reads OPTIMVS EGRORVM MEDICVS FIT TOMA BONORVM – ‘Thomas is the best doctor of the worthy sick’ – proclaiming Thomas’s superiority as a healer for the faithful. The reverse shows Becket’s pall-covered body lying on a bier, which rests on a colonnade of semi-circular arches.  Two priests stand nearby.  Above the bier is a scene showing a knight attacking Becket.

Large numbers of ampullae were sold in Canterbury over the years, featuring many different designs.  The stained glass ‘miracle windows’ in the cathedral include depictions of ampullae, demonstrating the close link of the flasks with Thomas’s miraculous healing. From the fourteenth century, however, ampullae were increasingly replaced by flat badges.

Many Becket ampullae have been found in London, a city with close Becket connections, and examples have been identified from sites throughout England and Wales. Ampullae similar to the one illustrated have also been identified in Europe, at sites in the Netherlands and Sweden. The widespread distribution of these Canterbury flasks shows the international reputation of Becket’s miraculous healing.

The ampulla illustrated here was found in 1990 by a metal detectorist in Sandwich Bay, Kent.  When details of similar chance finds are recorded through the Portable Antiquities Scheme, they can add considerably to our knowledge and understanding of medieval pilgrimage.

Many thanks to Grace Conium of Canterbury Museums and Galleries for her help with sourcing images for this article.

Examples of ampullae can be seen on the following websites: