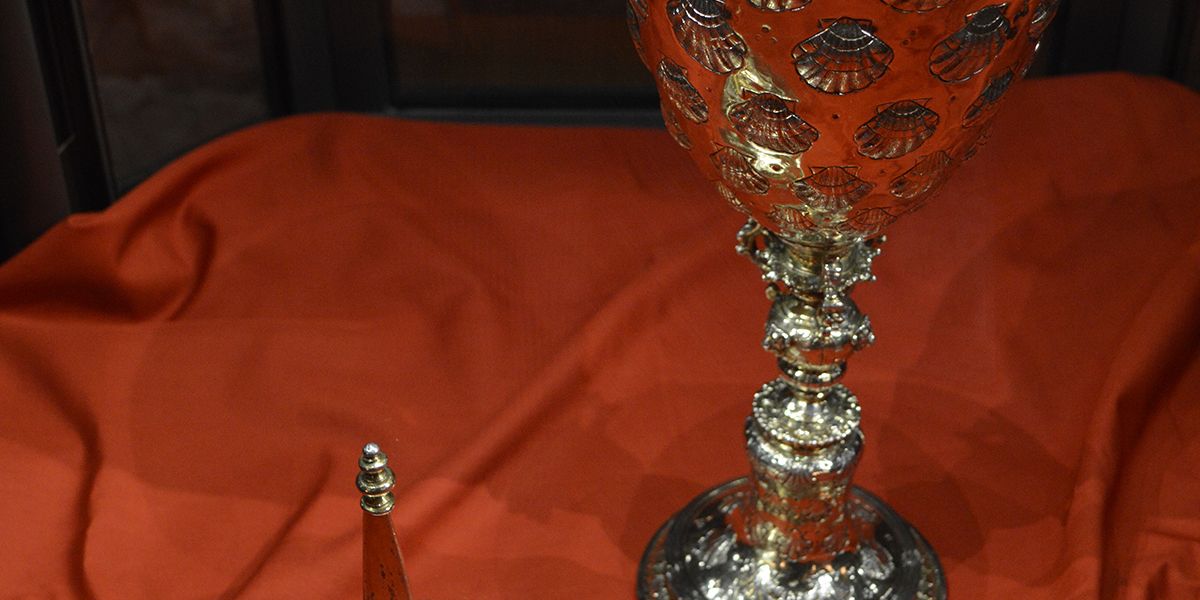 This month in the Crypt we have an early 17th Century Steeple Cup on display. One of our Archive assistants, Madylene Outen, tells us more about this fascinating piece.

“Canterbury Cathedral cares for some of the silver collections of parishes in the diocese. Most of this is silver for
use during the Communion. One such item in the Cathedral’s care is a particularly beautiful steeple cup from St Peter and Paul, Charing (near Ashford). It is a glistening piece with an interesting shell motif. It stands tall with a three-sided finial.

Steeple cups are covered cups with distinctive domed lids and with a finial on top. They would normally have been used in a domestic setting for banquets. They first appeared in the 17th century; the Charing cup was made in 1600 so could be considered an early example of the style.  The cup is silver gilt which explains its lustrous quality. Sometimes known as vermeil, silver gilt is silver overlaid with a thin layer of gold, which makes the object lighter whilst still maintaining the look and appeal of solid gold. The Charing cup was gifted by Mrs Elizabeth Ludwell to the parish in 1765 and the inscription reads ‘GIVEN FOR USE AT THE COMMUNION TABLE’. It was presumably an item originally intended for domestic use which was adapted for church use.

There is both religious and non-religious symbolism behind the shell motif. Shells are, of course, linked to water and Christians hold water as symbolic of life. As water does not have a definite shape an illustration of a shell may be used to relay this connection. Shells are also often used in baptism. Because of this link between water and life shells can often represent fertility and health. An alternative meaning is that of protection and safety,
because to the power of the sea. The scallop shell became the symbol of St James the Great, patron saint of, amongst other things, pilgrims, knights, vets and Spain! Scallop shells have indeed come to represent pilgrimage. Whilst this piece is British-made it certainly reflects a more continental style from that period.”

The Steeple cup will be on display in our Crypt until the beginning of August.

See here for when the Crypt is open for visiting.