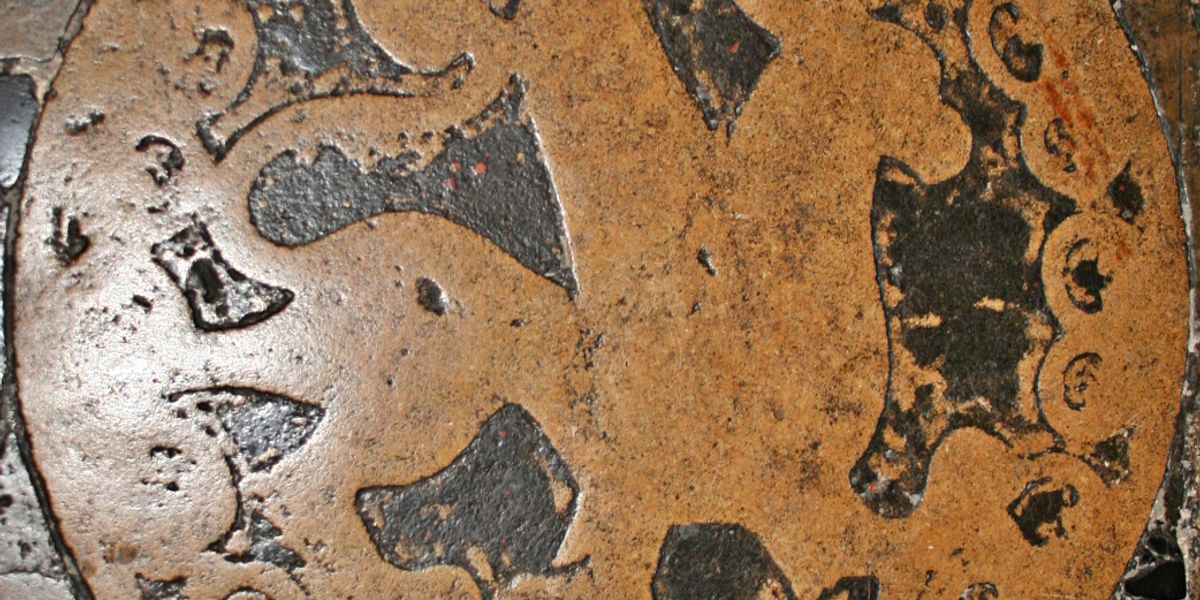 As many readers will know, December 29th marked the feast day of the martyrdom of St. Thomas Becket, our most well-known saint and martyr at Canterbury, when a special service is held in his memory.

Becket’s tomb has been moved and destroyed over the centuries, and now we have a simple candle burning in the spot his shrine last stood in the Trinity chapel. This open area at the east of the church could easily be overlooked as it vies for attention with the likes of the tombs of the Black Prince and Henry IV. But the real treasure can be seen when you look to the floor and its beautiful paving.

This pavement was laid at the request of Archbishop Stephen Langton for the new site of Becket’s tomb in the Trinity Chapel in 1220 (previously it was housed in the crypt), and there is strong opinion that at least some of it was reused from paving laid before the High Altar from 1130. Legend has it that this is the spot that Becket’s body was laid overnight. Less likely suggestions have been that it was a gift from Pope Innocent III or King Henry III. Although the marble itself is Italian, the work was likely to have been English or French in late Romanesque style. The central design is known as the Opus Alexandrinum, named after the style of paving commissioned by Emperor Alexander Severus for basilicas in Rome, and is said to be one of the most impressive and expensive to be laid in medieval England.

Surrounding this on either side are paved roundels depicting signs of the zodiac, labours of the months, the seven virtues and vices, as well as some mythological beasts. One such is the Tetramorph.

This strange hybrid beast can trace origins to ancient civilisations such as the Assyrians, and its name means an amalgamation of four beats. The Christian use of the creature is as a symbol of the four Evangelists, Matthew, Mark, Luke and John, who’s animal symbols are respectively an angel (representing Matthew’s message of humanity and reason, and the incarnation of Christ) a lion (representing Mark’s message of courage and Christ as King), a bull (representing Luke’s message of redemption through sacrifice), and an eagle (representing John’s message of the human spirit and its relationship to the divine personality). Whilst the roundels origin is unknown, it is possible that they were brought from St. Omer by the priory monks who had spent time there between 1207 and 1213 during a period of exile. There are a further six roundels at the east end of the shrine site, made of a mixture of stone including the rose-pink marble the shrine itself was made from (supposed fragments of the shrine marble are kept in the Cathedral Archives).

The dismantling of the shrine was part of an attempt by Henry VIII to vilify Becket as a traitor to the crown and erase his name from history (and also an opportunity for precious metals and gems to be removed to the royal treasury). Clearly, long-term, this has failed. Whilst the shrine destruction is undoubtedly a sad event, there is still a simple beauty to the solitary candle marking its place, especially surrounded by such spectacular marble flooring and mosaics. The whole paved area exudes a quiet stillness in contrast to the bustle of visitors and worshippers moving round the ambulatory, replicating the procession of pilgrims around the shrine in the Middle Ages. It seems the ghost of the shrine still remains.

–Laura Matlock, Inventory Administrator, with thanks to research by Margaret Sparks and David Bell

Please contact the Inventory Administrators at archives@canterbury-cathedral.org for further information.