The mazer and the shoe buckle 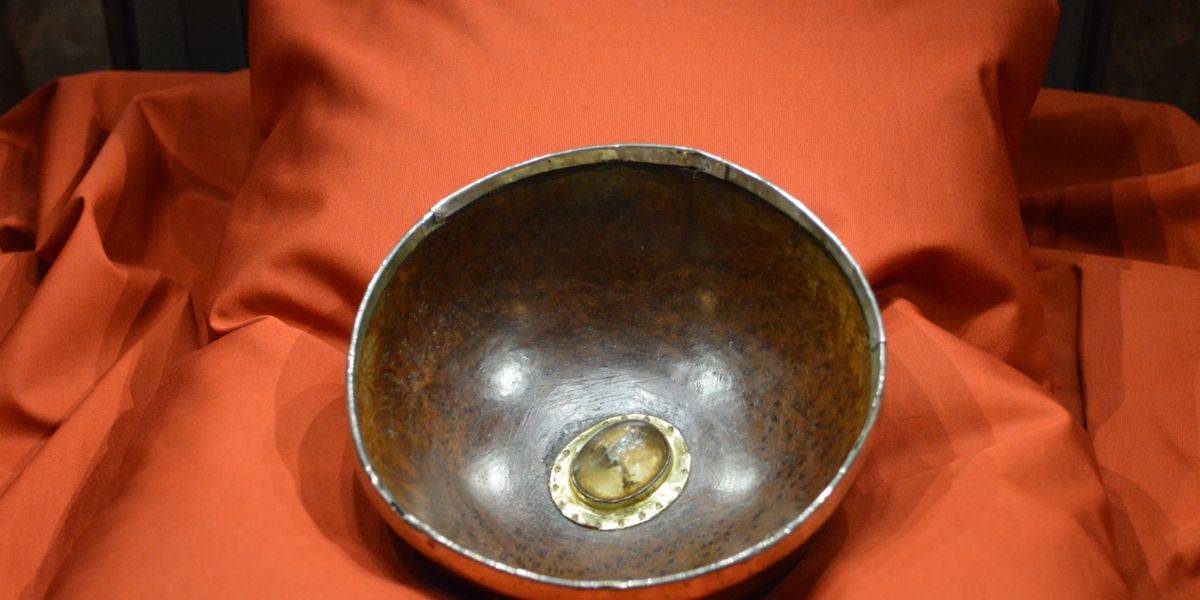 The mazer from St Nicholas’s Hospital Harbledown which is held here at the Cathedral is a curious thing. The name mazer has a Germanic origin, from the word masa, which means a spot. Mazers were made from a speckled wood, and are communal drinking vessels.
The Harbledown Mazer is a typical 14th-century example. Mazers of this date are usually bowls made of a hard wood, often maple or elm, which gives a decorative texture and pattern. They often have a gilt or silver rim and maybe another decorative device in the well of the bowl. This is where the Harbledown Mazer is particularly unique: in its centre is what is purported to be the buckle from a shoe of St Thomas Becket, made of crystal and in a metal setting.
The vessel does show wear, with the silver rim worn and soft in places and signs of old repair around the buckle itself, but like a further mazer belonging to the Hospital held at the Canterbury Heritage, it is a fine example of a type of vessel quite commonplace in the Middle Ages, but which rarely survive today.

Harbledown, a village on the outskirts of Canterbury, was the home of a leper colony, established by Archbishop Lanfranc in 1084. It was considered to be a particularly healthful place due to the abundance of herbs grown in the fields around it. At a time when leprosy was a very real and highly contagious health threat the village was a safe distance from Canterbury but not in complete isolation. By the 1400s there was no longer the need for a hospital at that site and it became alms-houses.
It is unknown how the community at Harbledown came to have in its care what was traditionally known as a relic of Becket.
When he visited the community in the early 1500s, Erasmus makes reference to a buckle, attached to a shoe: “On the left side of that road is a an alms-house (mendicabulum) of some old men; one of whom runs out as soon as they perceive a horseman approaching, and after sprinkling him with holy water, offers him the upper-leather shoe with brass, in which a piece of glass is set like a gem. This is kissed, and money given him… when the shoe was held out, he asked what it meant. And being told it was the shoe of St. Thomas, he was so provoked, that turning to me, ‘What! (Says he) would this herd have us kiss the shoes of all good men?” Could this be the same buckle?