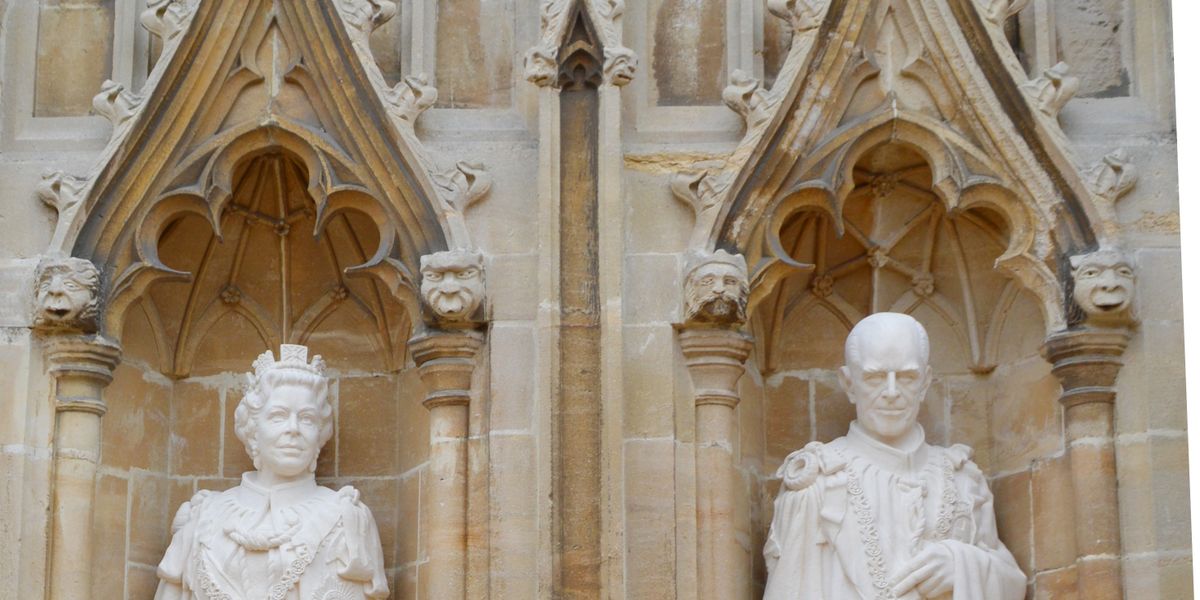 After the recent excitement of a Royal Visit to Canterbury Cathedral for the unveiling of two new statues of Queen Elizabeth II and The Duke of Edinburgh, it seems a good time to look into the history of the many wall niches at the west end of the Cathedral, and their inhabitants.

Most of the wall niches (bar the 19th Century North West Tower) were built in the 1460s but by the 19th Century many of the statues within were badly damaged or eroded completely. In 1863, the Dean and Chapter started to consider ways to improve the area and re-fill the niches, and it was decided to have new figures carved. Various donors participated, including Dean Alford and Archbishop Longley, as well as the Dean of Westminster and various individuals and organisations, such as The Ladies of Canterbury.

A book put together by Dean Alford’s widow shows that the original plans were changed on a number of occasions*. The first plan was to carve 56 statues, however an article written for the Kentish Gazette in 1865 gives the names of 61 figures to be represented. The commission was in the end given to Theodore Jean Baptiste Phyffers (1821-1876), a Belgian sculptor working out of London (his name has been mistakenly spelt Pfyffers subsequently), partly because he was able to quote £24 a statue. By 1868, within five years of the original plan being put forward by the Dean, 31 statues had been erected.

There was a second phase of interest and effort, which resulted in more statues (the precise number is unclear) being put up before 1871. In 1872, the Dean’s widow records that 47 statues were already up in their niches. There have been various lists created at the time and since naming and numbering the statues, but the lists do seem to vary! There are 53 statues at present (minus the two new arrivals).

Phyffers’ technique to ensure the longevity of the statues was to silicate, or harden, the stone, using a chemical solution including flint. Even so, many of the statues are considerably eroded and some are missing heads and hands.

Notable figures in the niches include St Augustine, first Archbishop of Canterbury, King Ethelbert and his Queen Bertha, who were responsible for the donation of the land on which the Cathedral stands, and from more recent history, Queen Victoria. A favourite character from the Cathedral’s history with the Inventory Administrators is Archbishop Hubert Walter. He was something of an adventurous spirit and diplomat during the 3rd Crusade, and was one of the players in the run up to the finalisation of Magna Carta (keep an eye out for Magna Carta related Collections Revealed articles in the summer). Our Queen Elizabeth and Prince Philip will make a fine addition and no doubt feel at home in such illustrious company.