Our Lady of Canterbury 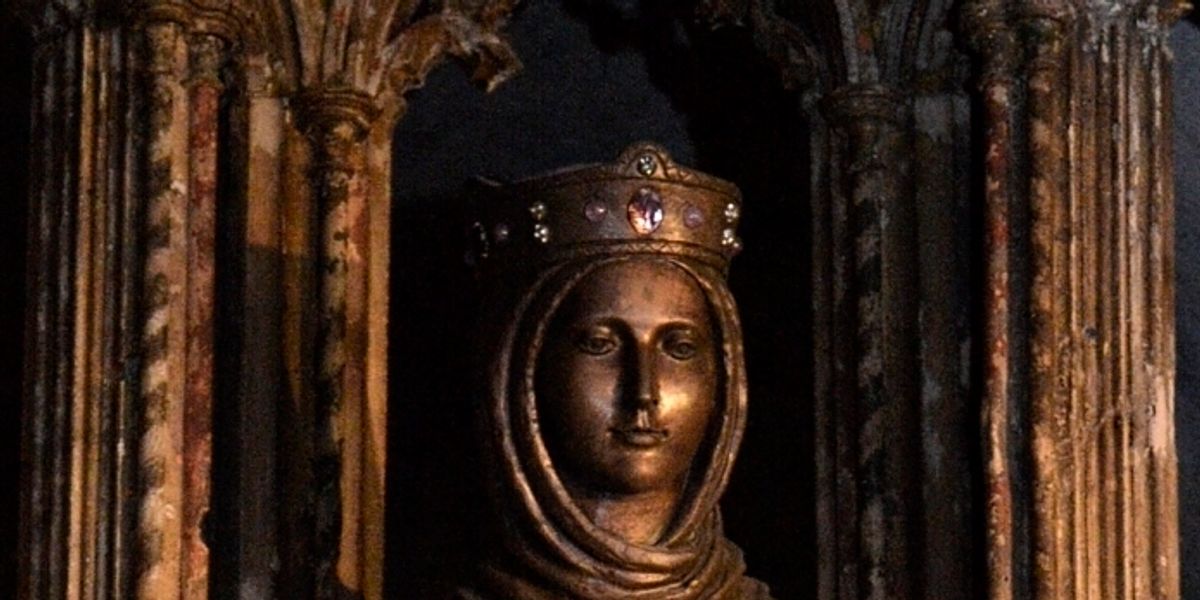 Our Lady Undercroft Chapel in itself is almost a hidden treasure, tucked away in the centre of the Crypt. It is used for silent prayer and reflection now, and can therefore not be highlighted on large group tours. The chapel itself has beautiful medieval designs, restored in the 1920s by W.D Caröe and wall paintings, which whilst not in perfect condition, still survive and show how the Chapel once was, depicting heraldic shields and stars and moons. The paintings were thought to have incorporated silverfoil that would have acted as mirrors and made the whole chapel twinkle. It has the feeling of a grotto about it, sat almost directly beneath the altar and almost entirely enclosed by screens, it is easy to lose oneself in its atmosphere of historic quietude.

The hidden treasure of the chapel that I have decided to focus on however is the statue of Our Lady. She is in plain sight but so easy to overlook as she is secreted away at the back of the chapel in a niche above the altar. The statue is made of bronze and represents the figure of Our Lady on a throne, wearing a jewelled crown. Her arms are to Her side and Her hands hold a half-standing figure of the Infant Christ. On the Madonna’s chest, there is a Canterbury cross in gilt, positioned immediately behind the Infant’s head. The Infant Christ has one of his palms turned upwards, potentially depicting a form of prayer that was popular before that of clasping ones hands together.

The front of the base is inscribed with the words OUR LADY OF CANTERBURY. To the right of the base the words C. SCOTT O.S.B. / MINSTER Abbey / THANET / 29.5.1982 are inscribed. These are the initials of the artist Sister Concordia who created this beautiful statue.

Sister Concordia entered into the Benedictine community and lived and worked at the Minster Abbey where she put her artistic skills to use creating works of art for cathedrals and churches across the world, including Westminster Abbey, Coventry Cathedral and the National Shrine of Wales, as well as those in Europe and America. Sister Concordia also created the statue of St Benedict in Our Lady Martyrdom Chapel here

The niche that the statue is placed in, appears to be original to the Chapel and most probably made by Henry Yevele, Master Mason. The plinth is canopied in a decorative gothic style, the inside is painted in red and gold with a spotted pattern almost making the niche itself look as if it is adorned with gems. The columns are patterned with barley sugar twists alternating with red and charcoal grey. At the foot of each column is a carved face, the right hand one has been worn beyond recognition but the left hand carving is in remarkably good condition depicting an impish looking face.

Sister Concordia has managed to capture a look of serenity in both mother and child, perfectly suiting the atmosphere of peaceful tranquillity that this chapel creates. I suggest stopping and taking a longer look next time you pass through the Crypt and take a moment to reflect on the statue and its beautiful surroundings.