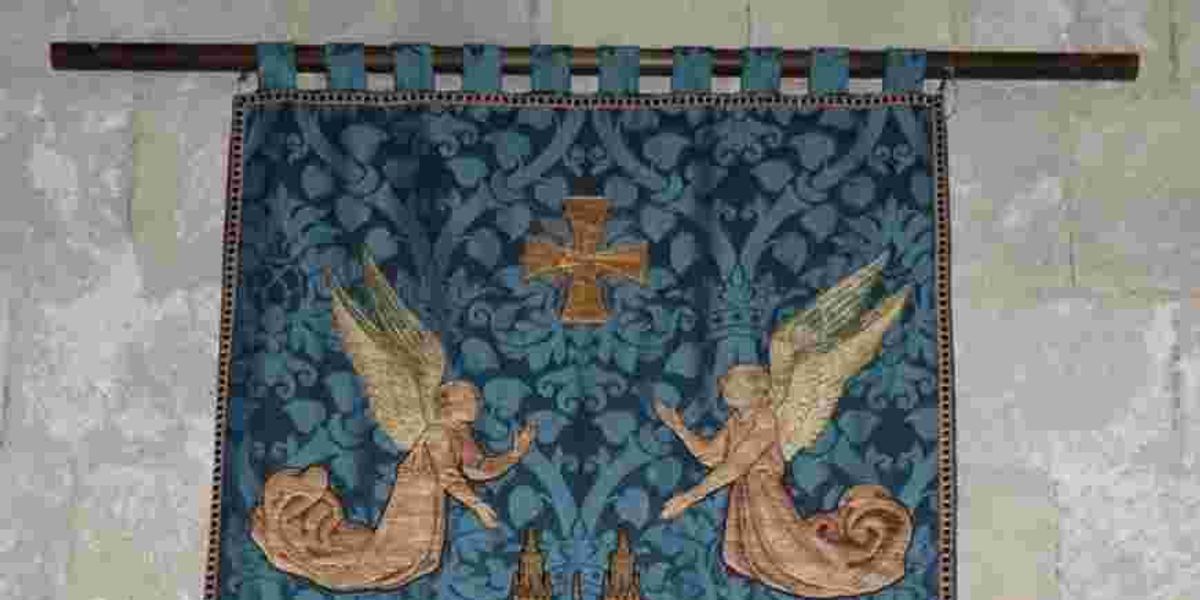 In a slight departure from our normal style, this article is about some of the wonderful pieces from the Cathedral’s collections that were made possible by the Friends of Canterbury Cathedral. In the last couple of months we have had the interesting task of looking into donations made by friends old and new that have enabled the Cathedral to purchase important items and ensure the future enjoyment and safety of artefacts.

The organisation called the Friends of Canterbury Cathedral was founded in 1927 by Dean Bell and was the first Cathedral Friends group in the world. It is made up of enthusiasts who admire and enjoy the Cathedral and its community. The group helps to preserve the building itself and the collections within. Margaret Babington became Steward to the Friends in 1928, and laid the foundations of the organisation that exists today, creating a community that not only aids in the preservation of Canterbury Cathedral but also encourages friendship and enjoyment through various trips, entertainment and organised events within the Cathedral.

It would be impossible to cover all of the items affected by the involvement of the Friends, so here is a selection of highlights.

In 1928 Mr Charles Hardy and Mrs Hardy donated two silver virges. Virges are used by the Virgers during services; traditionally they were used to make a path through crowds for the clergy to pass through unharmed. Now they are purely ceremonial, but still an important part of ecclesiastical regalia. These particular virges are a copy of a pair made in Charles II’s reign. They each have the arms of the Dean and Chapter on one side and the arms of the Archbishop of Canterbury on the other. They are 42 inches tall and hallmarked London 1928; the maker’s mark of HHP shows they were most likely made by Henry Hodson Plante. The dedication of these particular virges is recorded in their inscription: “In Memory of the Primacy of Archbishop Davidson, the Gift of Catherine Augusta Victoria Hardy 1928″ and “In Memory of the Primacy of Archbishop Davidson, the Gift of Charles Hardy.” These two virges are a perfect example of items that are both functional and decorative.

The 1930s was a decade of great artistic action and patronage on the part of the Friends. During this time they worked closely with Dr E W Tristram on both restoring artwork and creating reproductions of wall paintings and tomb decorations. (Please keep an eye out in the future for a more in depth look at Tristram and his relationship with the Cathedral.) They also aided in repairs to the Corona, All Saints Chapel and the Christ Church Gate, supported the move of the Reculver columns to the Crypt (another future Collections Revealed topic), and made possible the repainting of heraldic shields across the Cathedral and its precincts, including the impressive collection in the Great Cloister. Of particular interest in the Cathedral is the Friends banner hung in the north aisle of the Western Crypt. It was made in 1935 and depicts an artistic interpretation of the west end of the Cathedral resting on a cloud supported by two winged angels, embroidered in various coloured silks. Above are two more angels and a gold cross patée top centre. The Diocesan Crest is at the base of the banner. It is edged with gold and navy braid and a blue silk tasselled fringe. On the reverse side is gold ribboned lettering in Roman capitals on a damask panel, saying Friends of Canterbury Cathedral and below this a small cross bottony. This is a really beautiful piece of work. Designed by Tristram and made by The Royal School of Needlework, it is still in wonderful condition.

In 1940 the Friends paid for the record of ceiling bosses in the Cloister now held in the Cathedral Archives (AddMs/24). The work was carried out by W M Gardner, T Wrigley and W J Smith, students at the Royal College of Art, between 1937-1939. It is a parchment book, 13in x 18.75in, bound in white leather with silver clasps. The artists created a lusciously rich record of the heraldry creating an illuminated representation using gold leaf and rich colours to create not only a practical record of the bosses but also an aesthetically pleasing one.

In 2014 this fine book was digitised by the Cathedral’s Digitisation Officer and can be viewed on the image database here.

It is also important to mention that the Friends played an important part in protecting the Cathedral and its collections in the Second World War. Their contributions went towards the employment of Fire Wardens and supplying them with equipment to ensure that any damage was dealt with quickly and efficiently.

The 1950s to the 1980s saw the Friends’ donations being put towards restoration work, purchasing vestments and bringing the Cathedral up to date technologically. A few donations of interest include the funding of the reproductions of the Black Prince’s Achievements, the creation of the Altar of the Sword point in the Martyrdom and the addition of the statue of Christ to the Christchurch Gate. Watch this space for more on these.

In 1992, the Friends presented a set of eight state chairs. These striking pieces can normally be found by the Nave Altar. The chairs (which also have a two prayer desks and a credence table in their set) were designed by Eva Jiřičná CBE a renowned Czech architect and designer, and made by the furniture makers Matthew Marchbanks Ltd. They are very contemporary in style but their grandeur fits well in the late 14th century Nave. There are two principal chairs with steepled backs and six with dipped backs. The seats are all fitted with padded cushions covered in two-tone beige corded cloth, and one red and two blue cushion covers. The credence table, which is glass-topped, may usually be found in the western Crypt in Our Lady Undercroft chapel; one of the prayer desks may also be found there. The other prayer desk remains with the chairs in the Nave. They are only normally reunited for large or important services. Their shape and design allude heavily to mediaeval furniture and shapes but they also appear modern and sleek.

This is merely a glimpse into some of the items that the Friends of Canterbury Cathedral have been involved in purchasing or protecting. The running theme seems to be that of enabling the Cathedral to have beautiful and functional items both to be used on a day to day basis and to be enjoyed by worshippers and visitors alike. The Friends are still as active as ever today and not only maintain their tradition and passion for the Cathedral and its collections and treasures but also contribute to the long-term preservation of the Cathedral itself. They have been heavily involved in the various Cathedral fund-raising campaigns and in the recent HLF bid.

For more information on The Friends please visit their website here