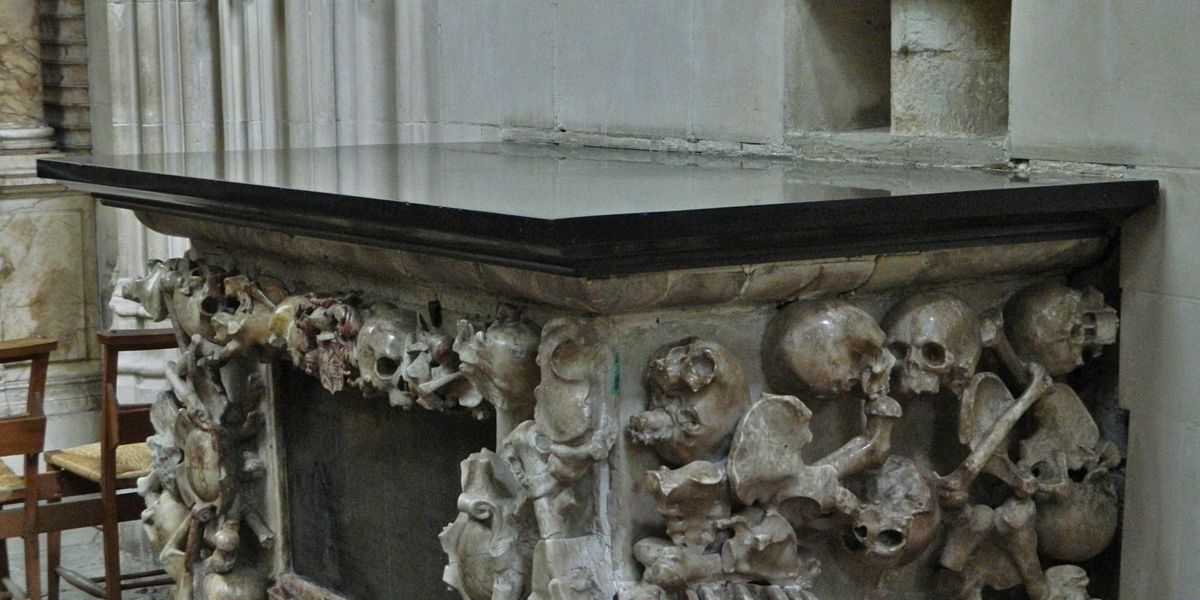 At this time of year, we are quite likely to see youngsters scampering about, cauldrons of sweets and goodies in hand, dressed as skeletons, ghouls, witches and in all manner of creepy costumes. It is a time of year when the veil between worlds is said to be at its thinnest, and our thoughts are often turned to the macabre. The festival of All Souls and Halloween are a time when we consider those who have departed this life before us, and when some of us use the costumes and pranks as a way of confronting the power of death. This is by no means an uncommon phenomenon. The Victorian age was full of examples of making death a part of life, and further back in the 17th Century we can see similar trends, as for example in the tomb carvings of Dean Charles Fotherby.

Charles Fotherby became Dean of Canterbury in 1615 after a life of service to the Church, including acting as Archdeacon for Canterbury since 1595. He died in 1619, and was laid to rest in the Lady Chapel or Dean’s Chapel as it is also known, adjacent to the Martyrdom.

His tomb is exquisitely macabre, craved all round with human skeletons, skulls and bones of every description. Cathedral Assistant David Bell has speculated as to whether there was an attempt to depict every bone in the human body. Carved from alabaster, the colour and texture is peculiarly realistic, and in stark contrast to the shining black marble slab that forms the cover.

The bones motif was quite fashionable in this period, and Fotherby’s tomb is described as, “a fine example of that obsessive early seventeenth-century morbidity which repelled later more squeamish observers” (A History of Canterbury Cathedral, ed. P. Collinson, N. Ramsay, M. Sparks). Indeed, in 1981, Francis Woodman described the tomb as “a thoroughly nasty tomb” and “a veritable carnary” in his The architectural history of Canterbury Cathedral. In the Cathedral’s Nave, is the tomb of Fotherby’s successor as Dean, John Boys, whose grand tomb is also crowned with a winged skull. There are many more ledger slabs and tombs from this period depicting skulls and bones. The memento mori became fairly mainstream in art of all kinds, not just funereal, in this period.

Far from being a depressing and gruesome reminder of our mortality though, the intended message of the memento mori was quite uplifting. It is has been said to have developed from biblical ideas such as Isaiah’s “Eat and drink, for tomorrow we die!”, meaning that we should seize the day and seize life, for it does not last forever. Another interpretation of the philosophy behind the style is that at this period and the in the years preceding it, there had been a shift away from thoughts of an impending day of judgment and the end of days, to thoughts of individual judgment at death. So the memento mori is also a way to remind people to live virtuously, for at the end we must answer for ourselves.

Fotherby’s Tomb in John Dart, The History and Antiquities of the Cathedral Church of Canterbury, 1726

It is surely human nature to want to explore the macabre and to turn death into something beautiful. Whilst Fotherby’s tomb may not be to everyone’s taste, it certainly must be considered an excellent example of sculpting in stone, and a vivid reminder of the transience and fragility of life.