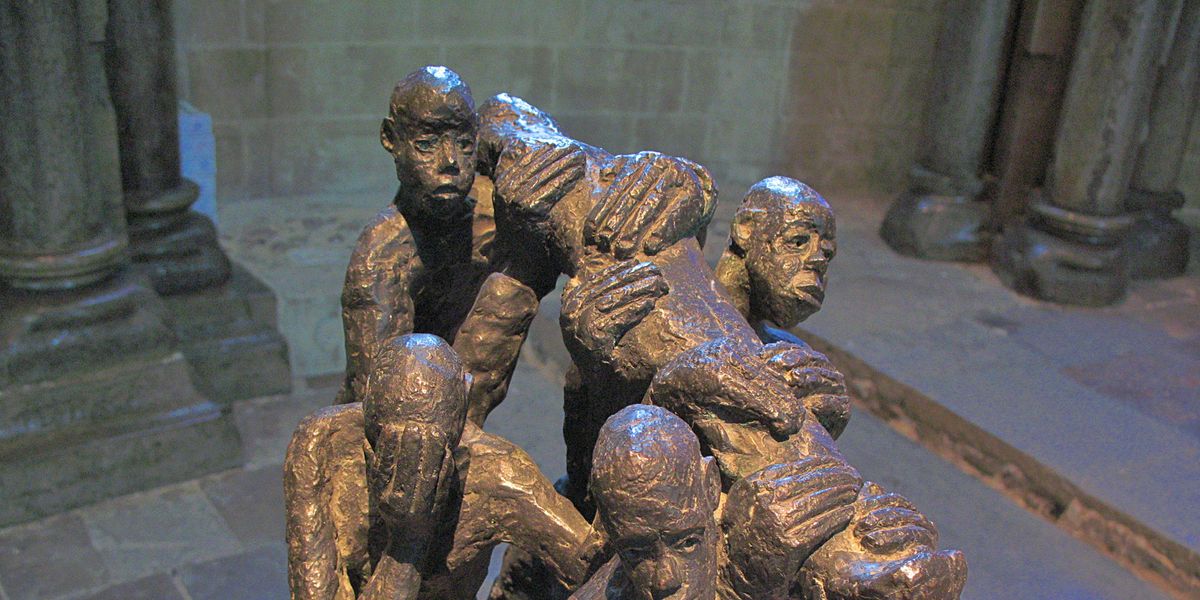 When visiting a place like Canterbury Cathedral, it is easy to be overwhelmed by its age and historic collections and to forget that some of the newer items also have an interesting story and provenance. Items that are crafted for the Cathedral or given as gifts often have a tale to tell too. One such item is the bronze Burial of Christ statue located in the Corona also known as the Chapel of the Saints and Martyrs of our Time. It stands on a plinth to the left of the chapel.

The statue consists of four figures carrying the body of Christ wrapped in a shroud. It is thought that the figures may represent apostles carrying Jesus to his burial place after his crucifixion. This is a popular subject in religious artwork and has been depicted notably by Michelangelo and Caravaggio amongst others. The statue really captures the struggle that the four figures are experiencing, both physically and emotionally; three are looking ahead of them, their faces lined with grief, whilst the fourth holds his head in his hands. Their clothes are thought to be a traditional dish-dash or thawb, a traditional African garment.

This is actually the second version of this statue given to the Cathedral. The first was made of terracotta in 1947. The Kenyan sculptor Rosemary Namuli (b.1928) was a student at The School of Fine Art Makerere, in what is now Uganda. Namuli was a student of Margaret Trowell, an artist and teacher who was deeply religious and whose work was inspired by her faith. The Burial of Christ statue was made under Trowell’s tuition.

Four bronze copies were later made. One was for Mrs Trowell, one was for Makerere University, one was exhibited at the US Modern Museum of Art, the final one was commissioned by Sir Bernard de Bunsen, who had been principal of Makerere College and became the first Vice-Chancellor of the University of East Africa. The terracotta original is considered an example of contemporary ecclesiastical artwork.

The terracotta model came to Canterbury Cathedral for display in the Corona while Victor de Waal was Dean. The model had previously been at the University of Nottingham, where de Waal had been Chaplain. The location of the statue within the Corona is no accident, the chapel itself is dedicated to modern martyrs and it encourages an awareness of a worldwide church community. The statue combines both of these messages.

Unfortunately, the statue was beginning to look frail and it was feared that it would not survive remaining on display. In 2001, Sir Bernard de Bunsen’s bronze statue was put on display in the Corona, following its gift by the de Bunsen’s family. This gift meant that the more fragile terracotta original could be removed from display to be preserved for future generations whilst not depriving visitors of the chance to see the statue.

Modern interpretations like this are still important as they chart the changes in taste and the focus of belief over time. Sculptures such as the Gormley piece ‘Transport’ in the Eastern Crypt, the reredos in St Andrew’s Chapel by Mészaros and even the Altar of the Sword Point with its striking and modern approach to representing the murder of Becket, are important interpretations of faith and belief in the 20th and 21st centuries.

Rosemary Namuli, now Karuga, continued on in the art world and moved more towards mosaics. She creates her own art using paper to create a mosaic affect. She still draws from African culture in her designs and was picked as one of only nine artists from the whole of the African continent who were selected to show their work at Studio Museum in Harlem. From there she has gained recognition and respect for her work and is praised for being one of the contemporary African artists breaking with traditions.

With thanks to Chris Crooks, Vesturer, for his research on this subject.

Please contact the Inventory Administrators at archives@canterbury-cathedral.org for further information.