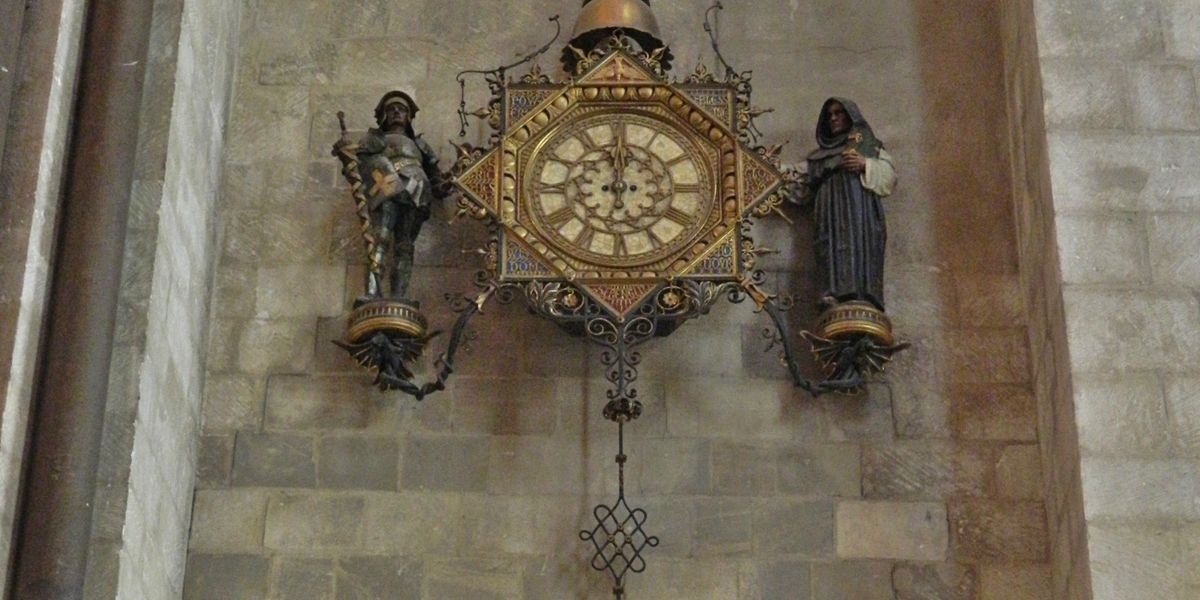 An unusual clock on the wall of the north-east transept was made to commemorate the 1300th anniversary of St Augustine’s arrival in Anglo-Saxon England in 597AD.

Often referred to as St Augustine of Canterbury, he had been sent by Pope Gregory the Great to convert the country’s inhabitants to the Christian faith and was considered the first Archbishop of Canterbury, building the first Cathedral on the current site.

In 1896 Dean Frederick Farrar initiated fundraising for commemorative works and the £10,000 target was easily raised without a formal appeal ever needing to be launched. Most of money was spent on restoring the Chapter House, including making the West Window (which includes images of Ethelbert, Bertha and Augustine). However, there was some money left over and it was decided to commission a clock for the Vestuarium or St Andrew’s Chapel. The design of the clock was left to Cathedral Architect Sir Arthur Blomfield, although it is unknown who undertook its construction. The design is reminiscent of Dutch or Southern German design of the previous century, in particular in its ornate brass fretwork and cost £206.

The design of the clock is very distinctive. The brass fretwork is very detailed, the intricate design almost hiding the lettering enclosed in red and blue triangles around the face, reading ‘power’, ‘riches’, ‘wisdom’, ‘honour’, ‘glory’, ‘blessing’ and ‘strength’, representing worldly and spiritual blessings.

The figures, or quarter jacks, on either side of the clock represent King Ethelbert (dressed as a knight) and St Augustine (dressed as a monk), bringing together the themes of the worldly and the spiritual virtues. These would have struck the bell positioned above the clock face with an English ting-tang movement (a high note followed by a lower note, but the striking mechanism has since been disabled. The clock face itself is a beautiful mother of pearl mosaic overlaid with gilt fretwork and roman numerals. Another distinctive feature is the very long pendulum (1550mm of the whole clock measuring 3000mm) ending in a bob in the shape of a sunburst with a face.

Originally intended for and housed in, St Andrew’s Chapel, the clock was moved in 1983 to the west wall of the north-east transept, facing St Stephen’s Chapel where it can be more easily seen and admired. As an unusual and beautiful part of the Cathedral’s collections, not to mention symbolising the Cathedral’s own origin, it seems only fitting that it be displayed so prominently.